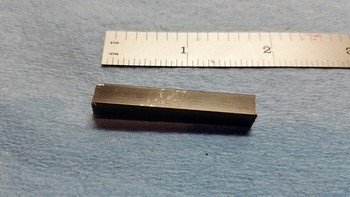 ​The single point cutter is made from .250 square W-1 tool steel. I bought a couple of 3  foot pieces of the tool steel so the first step is to cut off about 1.5 inches... a hack saw works fine.
To make the next cuts a 3/16" end mill is used. Once the new end mill was installed I adjusted both the X and Y axis to zero. The X axis is adjusted to zero when the end mill is just touching the front of the blank cutter and the Y axis is adjusted to zero when the end mill is just touching the right side of the blank. Be aware of backlash and only adjust the zero's after moving the table toward the end mill, if you find it necessary to reverse the direction of the table before you set the knobs to zero then you will need to start over. Setting these zero's is critical to making a single point cutter with the correct tooth profile. I do it with the mill running at a slow speed and very slowly move the table toward the end mill until I hear it start to cut and then shut off the mill and adjust my zero.
Refer to the pictures from Jerry's classroom handout for view of next cuts. The 3rd cut is done next with a 3/16" end mill . The dimensions for these cuts will be determined by the wheel or gear you are making. In my case I needed to remove equal amounts of metal from the front and back side so I would be left with a width of .095" (same as the width as 2 teeth and 1 space). The distance from right to left that I would remove material in my case was .260" (4 times tooth depth).
The 4th and final cuts are done very similarly. Again it is necessary to carefully re-zero the handwheels as done before only this time you will be zeroing against the cuts that were just made. The diameter of the end mill is determined by the radius of the tooth load surface. If you were cutting a clock wheel you could determine this radius by knowing the module and other pertinent dimensions and using Wild's book but as I mentioned earlier this gear has unusual tooth profiles and unusual spacing so I am just trying to duplicate the tooth profile. I held the ends of drill bits under a good tooth and used the drill size to determine the tooth radius. In this case I decided that using a 1/16th" end mill would be very close to giving the the correct tooth shape. (I find this difficult to do even with magnification so some trial and error may be necessary).

​After re-zeroing the handwheels and putting in a 1/16" end mill it was time to calculate the last cuts. Referring to Jerry's handout again  for the 4th cut I had to figure how much to take off of both the front and back of the cutter. The width of the final point of the cutter is to be the same as the space between the teeth of the gear. I used pin gauges to determine the space between each tooth and it was .035". The current cutter width after the 3rd cut was .095" so I had to take off .060" in the 4th cut divided over the front and the back so I had to take .030" off of each side. Since what was left was going to be the cutting surface I ran the mill at a high speed and took the remaining material in one pass on front and back. Also it was very important that the depth of the cut from the right hand side of the blank cutter moving toward the left is the height of the teeth which in my case was .065". After the last cut was made I measured the tip of the cutter in case I might have to take another thou or two off but my measurement was good so I was able to remove the cutter from the vice.
The only thing left to do with the single point cutter was to harden it. I heated it to bright red and quenched it. Then it needs to be tempered to a light straw color and quenched again.  After the tempering then the top of the cutter needs to be sharpened by rubbing it on a sharpening stone. I did not have enough hands to take any pictures of the hardening or tempering process but there is lots of information on how to do it online. The best searches are probably for how to harden a chisel or a knife blade. I hope my description of the process  has been helpful to anyone wanting to make a cutter for a gear or a clock wheel.

On page 2 will be how I used this cutter to make the new winding gear.
Telechron setting gear page 2
Proudly powered by Weebly