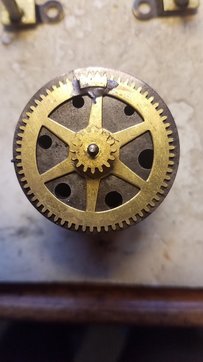 This wheel is the second wheel on the strike side out of a New Haven Kitchen clock. The clock was no longer striking. This was not the only problem with the clock but it was the one that took the most time to repair. Some repairman in the past had soldered a small piece from a similar wheel to this wheel where a few teeth had been bent or were missing. This actually worked quite well but I wanted to do a more conventional repair. The lantern pinion on this wheel had 3 bent trundles and upon closer inspection there were 3 different sizes of trundles installed. As I started to replace the trundles I found that the upper lantern pinion shroud had all the trundle holes drilled oversize causing all the trundles to be very loose with a lot a shake. The holes in the lower shroud seemed to be OK. I decided the best repair was to make a new upper shroud and replace all the trundles. I thought it might be interesting to some so I decided to document the procedure.

​Feel free to contact me if you have a question about this procedure. My info can be found on the 'Contact' page.
Click on any image for a full size photo.
I had originally planned to use a single point cutter to cut the new teeth... that is why I went to so much trouble to mount the wheel on an arbor and put backing plates on both sides of the wheel for reinforcement which would not have been necessary if I had known I was going to use a slitting saw. Once I had the wheel mounted and ready to cut the teeth I tried each of the cutters I had previously made and none of them matched this tooth profile as closely as I had hoped. Since I only had a few teeth to cut I decided to simply use a slitting saw to cut the slot between the teeth and finish each of them off with small files. I didn't think it was worth the time it would take to make a new single point cutter to match this profile for just a few teeth. I used the pin gauge to determine the size of slitting saw I needed. In this case I used a .032 slitting saw. The wheel had 64 teeth and I set up the controller for my CNC rotary table for 64 divisions. Having the CNC rotary table to do all my indexing is some of the best money I have ever spent. In this case I only needed to make a few slots but I was assured they would be perfectly placed.
Proudly powered by Weebly